Error Mitigation and Dynamic Circuits will unlock new era of exploration on IBM Quantum computers for at least the next five years.

In addition to the new Osprey chip, IBM has announced two innovations at the annual Quantum Summit, one around error mitigation, and one around dynamic circuits. Both will have a significant impact on the development of quantum towards its goal of quantum advantage over traditional computing

Quantum computing is inherently noisy, producing errors at a rate that is over 100 billion times higher than traditional computer systems, due both to the inherent fragility of quantum information and our controls today are analog rather than digital, so we are much more sensitive to small fluctuations in signaling. Theoretically, there are three approaches to dealing with this: error correction, error suppression, and error mitigation. Unfortunately, error correction, as we enjoy with classic computers, is costly for quantum, so IBM Research is focusing for now on error suppression and mitigation.

The simplest approach is measurement error suppression, which is practically “free” and can offers minor improvements. For error mitigation there are several approaches with different efficacy and costs. Zero Noise Extrapolation (ZNE) can reduce bias by scaling noise and then extrapolating back to to the zero-noise limit. Unfortunately, ZNE can cost 3-4 times as much in compilation and execution costs. Finally, and most promising, there is Probabilistic Error Cancellation, or PEC. PEC analyzes the quantum circuit to be run, and then defines a collection of circuits that mimic the effect of cancelling the noise, similar to noise-cancelling headphones. 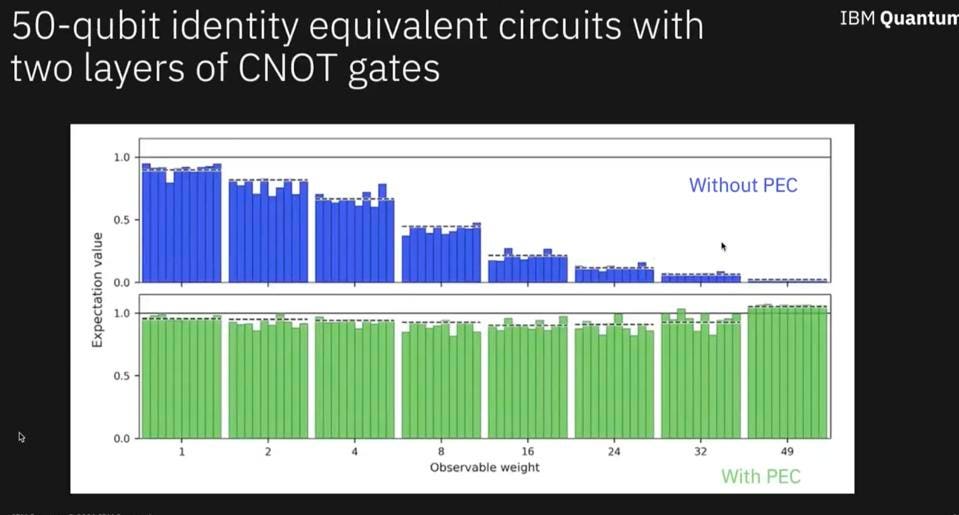 IBM measurement of PEC and the dramatic impact it can have on errors. IBM

At the Quantum Summit, IBM announced it would be offering a simple approach to test users appetite for error mitigation, with three levels available. The goal is to get users to provide feedback on various experiments at different levels of error resiliency.

And at Level 3, the errors can be 1000 x less frequent, but with of an order of magnitude of cost. IBM

On to the second announcement: IBM is now offering Dynamic Circuits, which can have a dramatic impact on what kinds of problems can be run on today’s quantum hardware. Basically, it allows the quantum developer to analyze the behavior of one gate and then determine what the next gate should do. This analysis is done on in real-time on a classic computer.

A Dynamic Circuit helps reshape the gates with mid-circuit measurements, which are performed on a tightly integrated classical computer.IBM

In talking with Blake Johnson, IBM Quantum Distinguished Scientist, he likened this to being able to add instructions to an x86 processor, such as the many matrix and vector instructions added by Intel and AMD. Once designed and included in the next generation chip, they get picked up by compilers and specialized libraries, so everyone can use it without having to understand the intricacies of the underlying hardware.

IBM said that these can be used for quantum error correction, simulations, machine learning, circuit knitting, entanglement routing and interactive quantum advantage. Eighteen IBM Quantum Systems around the world will now have this capability, which requires new control hardware that can process the mid-circuit steps. 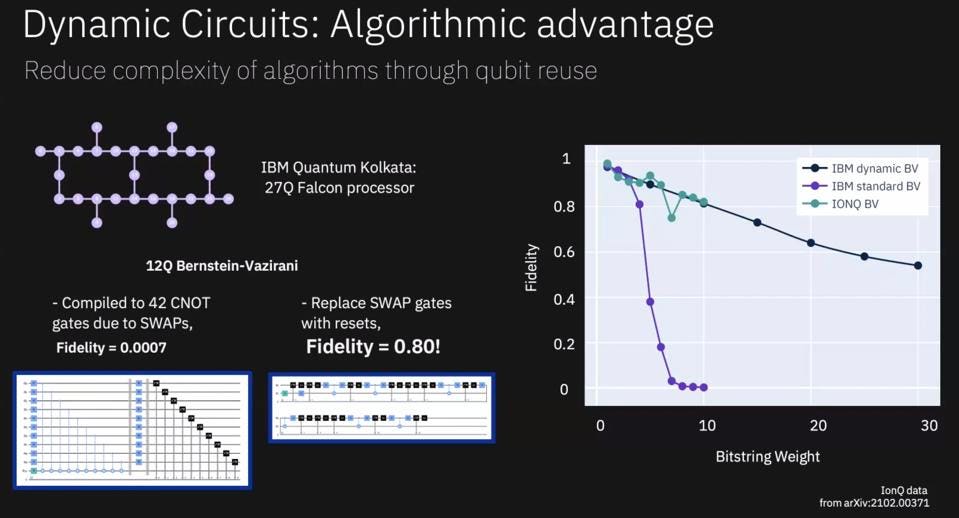 IBM continues to drive the quantum movement across the globe, and the Quantum Summit is the place where their academic papers culminate in real hardware and software. Handling quantum errors has been a large impediment to larger systems, and IBM hopes to gain an understanding of the appetite for various techniques. And dynamic circuits could open the quantum systems to additional experimentation and uses. Together, these advances could hold the keys to achieving quantum advantage much sooner than most of us thought possible.