The high-end Power10 server launched last year has enjoyed “fantastic” demand, according to IBM. Let’s look into how IBM Power has maintained its unique place in the processor landscape.

This article is a bit of a walk down memory lane for me, as I recall 4 years working as the VP of Marketing at IBM Power back in the 90s. The IBM Power development team is unique as many of the engineers came from a heritage of developing processors for the venerable and durable mainframe (IBMz) and the IBM AS400. These systems were not cheap, but they offered enterprises advanced features that were not available in processors from SUN or DEC, and are still differentiated versus the industry standard x86.

While a great deal has changed in the industry since I left IBM, the Power processor remains the king of the hill when it comes to performance, security, reliability, availability, OS choice, and flexible pricing models in an open platform. The new Power10 processor-based systems are optimized to run both mission-critical workloads like core business applications and databases, as well as maximize the efficiency of containerized and cloud-native applications.

What has IBM announced?

IBM introduced the high-end Power10 server last September and is now broadening the portfolio with four new systems: the scale-out 2U Power S1014, Power S1022, and Power S1024, along with a 4U midrange server, the Power E1050. These new systems, built around the Power10 processor, have twice the cores and memory bandwidth of the previous generation to bring high-end advantages to the entire Power10 product line. Supporting AIX, Linux, and IBM i operating systems, these new servers provide Enterprise clients a resilient platform for hybrid cloud adoption models.

The latest IBM Power10 processor design includes the Dual Chip Module (DCM) and the entry Single Chip Module SCM) packaging, which is available in various configurations from four cores to 24 cores per socket. Native PCIe 5th generation connectivity from the processor socket delivers higher performance and bandwidth for connected adapters. And IBM Power10 remains the only 8-way simultaneous multi-threaded core in the industry. 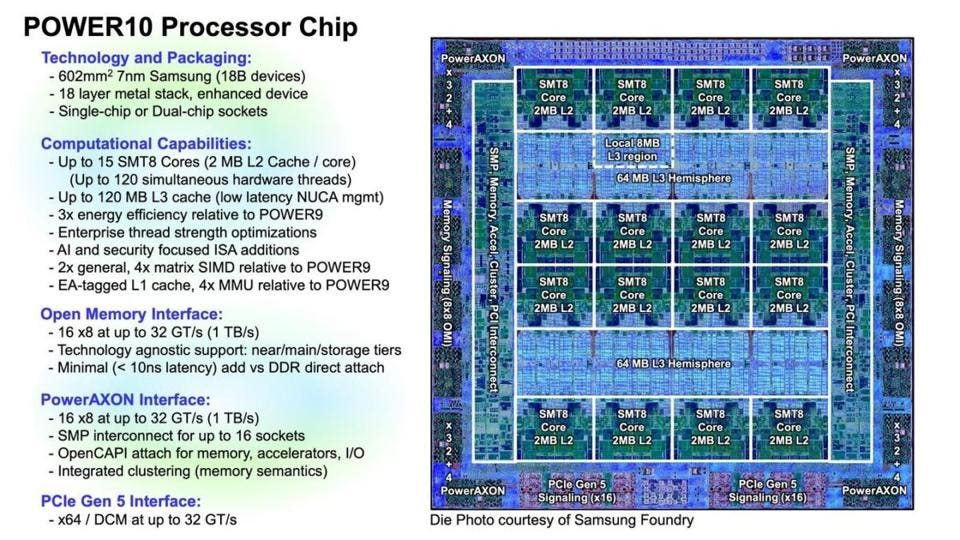 The IBM Power10 chip is a tour-de-force of advanced technologies. IBM

But perhaps even more telling of the IBM Power strategy is the consumption-based pricing in the Power Private Cloud with Shared Utility Capacity commercial model allowing customers to consume resources more flexibly and efficiently for all supported operating systems. As x86 continued to lower server pricing over the last two decades, IBM has rolled out innovative pricing models to keep these advanced systems more affordable in the face of ever-increasing cloud adoption and commoditization.

While most believe that IBM has left the hardware business, the company’s investments in underlying hardware technology at the IBM Research Labs, and the continual enhancements to IBM Power10 and IBM z demonstrate that the firm remains committed to advanced hardware capabilities while eschewing the battles for commoditized (and lower margin) hardware such as x86, Arm, and RISC-V.

Enterprises demanding more powerful, flexible, secure, and yes, even affordable innovation would do well to familiarize themselves with IBM’s latests in advanced hardware designs.