Intel has joined the fray to create a new category of Smart Network Interfaces, but with a different strategy than NVIDIA.

Back in 2020, when we were all still afraid to leave our homes, NVIDIA launched what it said was a new kind of processor that combined the networking capabilities from Mellanox with the acceleration capabilities of a GPU. Calling the device a Data Processing Unit, or DPU, NVIDIA foresees the emerging need for significant pre-and post-processing of data on the networking side of an accelerated server. Intel, sensing a new opportunity, recently announced it’s “IPU” concept car, an FPGA-based NIC surely modeled after Microsoft Azure’s pervasive NIC, but without any significant accelerators in its roadmap. What does NVIDIA foresee that Intel does not?

Specifically, NVIDIA announced it’s first DPU, the BlueField-2X, with a 60 TOPS GPU next to a Mellanox NIC, intending to jumpstart the development process in October, 2020. The NVIDIA DPU Roadmap shows a BlueField-3X in 2022 bumping up the Arm cores to 350 SPECINT, while BlueField-4 cranks it up in 2023, with 1000 SPECINT and 400 TOPS. That’s a whole Ampere-class GPU sitting on a NIC! As an example of adoption, VMware announced support for the BlueField-2 as part of what they termed a “redefinition of Hybrid Cloud Architecture”. This is heady stuff. 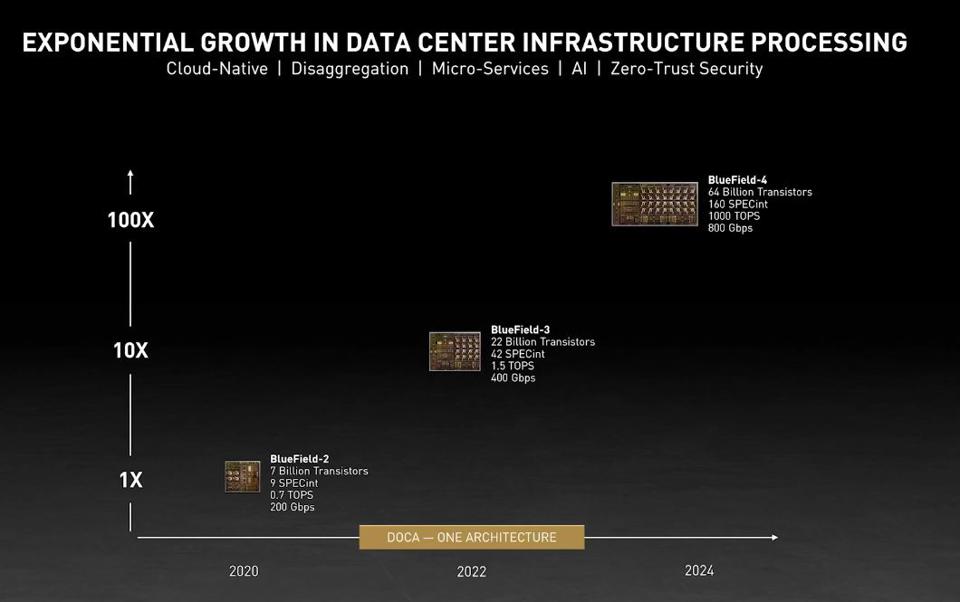 Sensing an opportunity, Intel recently came out with its own Smart NIC strategy, and announced the IPU, for Infrastructure Processing Unit. The initial IPU is based on a Xeon CPU and an FPGA, which the company indicated could be replaced with a hardened ASIC in the future. The FPGA allows each data center designer to customize their clever infrastructure with reconfigurable hardware. 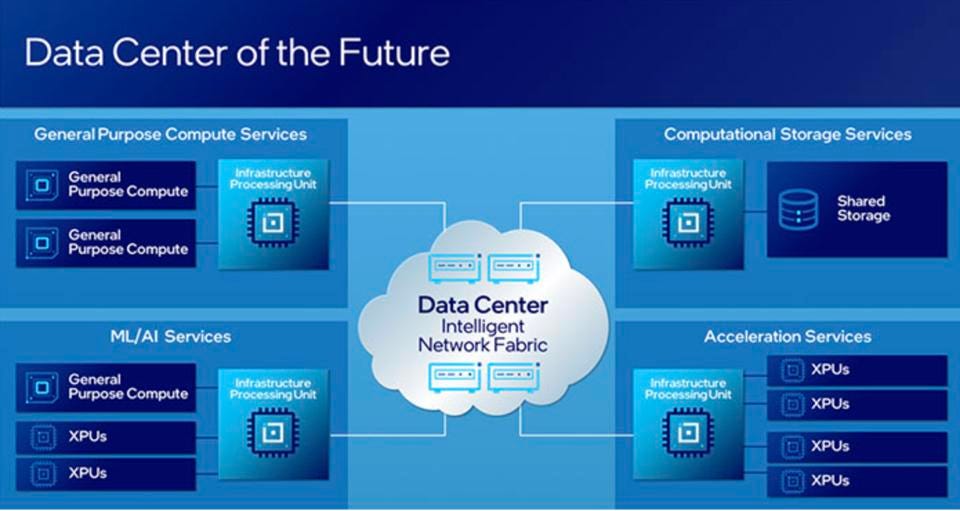 Intel shows a vision for the future of the data center that is not noticeably different than that of NVIDIA. source: Intel

Clearly the two largest semiconductor companies, measured by market cap, have very different visions here. Intel sees the future for hyper-scale data centers through the lens of their experience with Microsoft, which inspired the company to acquire Altera in 2015. Enabling fully customizable optimizations could be a boon to companies with the proper hardware programming skills.

But if NVIDIA is correct that massive acceleration will become required, we would have expected Intel to opt for a roadmap that should be obvious, adding a Habana accelerator to the IPU design. And of course they could still go down that road, but they would be following along NVIDIA’s path and would be quite late. The current Intel IPU has a very modest Xeon D CPU and a Stratix 10 FPGA. It also supports up to 50Gb Ethernet, while the NVIDIA DPU BlueField 2X has supports 200Gb Ethernet, a 60 TOPS GPU and a 70 SPECINT Arm CPU. Clearly NVIDIA sees demand for much more performance, and an appetite to pay for it. 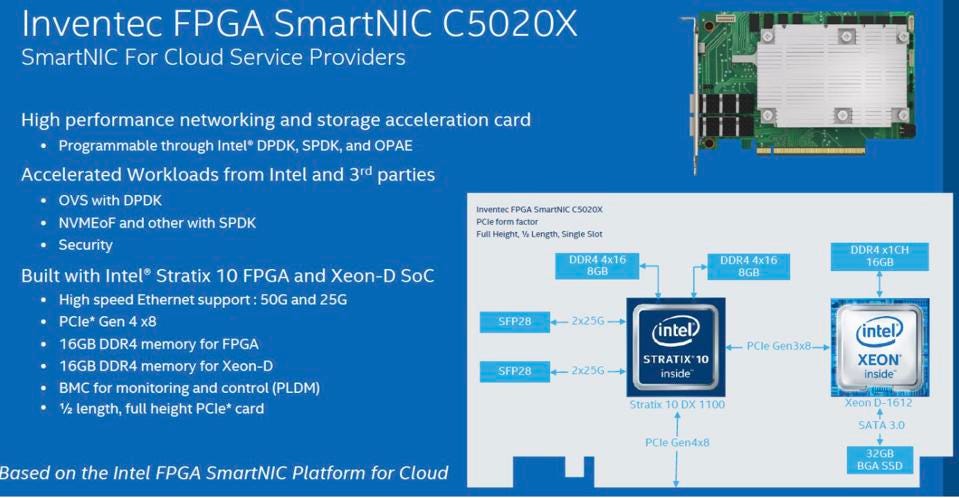 Intel’s DPU as implemented by Inventec. The FPGA Stratix-10 is the heart of the acceleration, and the Xeon D provides control logic. source: Intel

Patrick Kennedy at Serve The Home (STH) has published a “NIC Continuum” that explains the differences, pointing to the Intel IPU as a category they call “Exotic” NICs using FPGAs. The NVIDIA DPU, is “designed to be an infrastructure endpoint”. So the question becomes, why did Intel skip the DPU category altogether? And what are the use cases for DPU that Intel will struggle to address with the IPU? 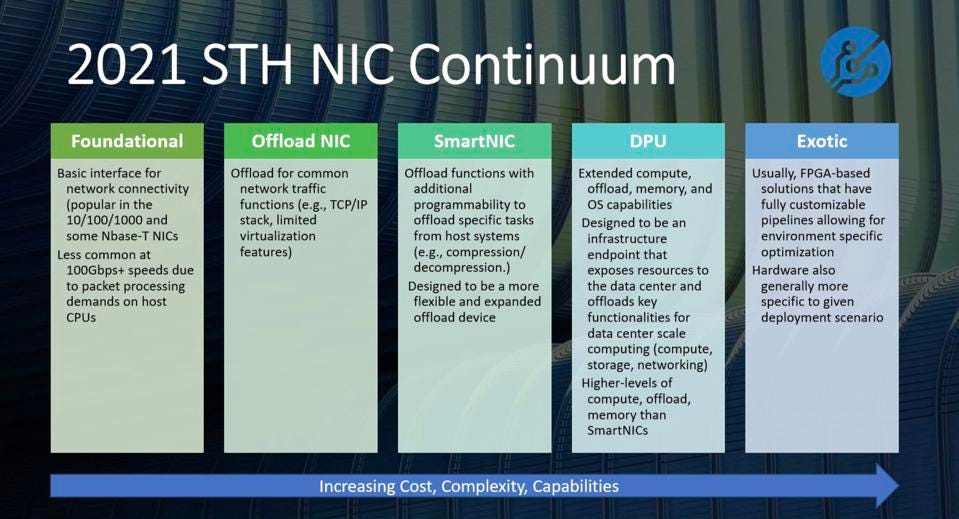 Serve the Home (STH) has laid out a nice continuum of NICs, calling the Intel IPU an example of an exotic network interfaces.
source: Serve The Home

Talking with NVIDIA’s Kevin Deierling, the DPU is designed to offload, accelerate, and isolate individual compute servers in the data center. Mr. Deierling explained that customers are already deriving significant value from the current DPU (BlueField 2 and 2X), and shared a few examples, including SDN, DNS, firewall and load balancing. In one case, a customer was able to offload 8 CPU cores, and achieve a 53-fold speedup, while another customer offloaded network packet processing from 12 x86 cores, and increased throughput from 15 Gb/s to over 100 Gb/s on Bluefield 2.

The basic requirements here are two-fold: 1) data centers must isolate and protect each and every server; there is no trust in an environment wherein a user can just download some code off the internet and run it on a server. 2) The efficiency of each server can be greatly improved if you offload and accelerate data pre- and post-processing, as well as network packet processing and firewalls, from the relatively expensive CPU.

But couldn’t Intel deliver similar results with an IPU? Results from Microsoft Azure would certainly support that conclusion, yes. The difference is that one needs to know how to program an FPGA, which typically means Verilog programming skills, not just Java, C++, and PHP. This is a difficult challenge and many if not most companies don’t have adequate FPGA skills to go down this route. But if you do, then the customization available on an FPGA can help you create accelerations that are quite fast and specific to your environment.

If NVIDIA’s vision comes to pass, a modern accelerated data center will have a network of Arm or X86 CPUs, equipped with ultra-fast GPUs, and a 400 GbE network which has 700 TOPS and 1000 SPECINT on each network controller, or DPU, attached to each server. That is more performance on the NIC than today’s fastest servers. On the NIC! The combination of an accelerated three processor combo on each and every socket stretches the imagination of infrastructure designers to create an entirely new paradigm. And NVIDIA CEO Jensen Huang is just fine with that.