Company claims Ergo2 is up to four times faster than Perceive’s first-generation Ergo chip, and can handle much larger models such as NLP.

Edge AI is coming into its own, with a variety of chips being launched that offer low cost, low power, and high performance. While training AI models gets most of the attention in the media, Inference processing will end up getting most of the revenue, especially at the edge. Global Market Insights, a respected market intelligence firm, projects that the market for Edge AI will top $5B in 2023, with a 20% CAGR through the next decade. While our gut feel is that $5B is too high, we feel the 20% growth forecast is far too low.

At any rate, the market is attracting many contenders, including Perceive, which was spun out of Xperi Corporation in 2018 to concentrate on this opportunity, and now already has its second product ready for market.

What did Perceive Announce?

The company is not replacing its Ergo product, but rather is adding a higher performance and more capable chip for demanding edge applications. As the table below shows, the new device delivers a big boost in image classification, and consumes less than 20 mW. Thats Milliwatts, or 1/1000 of a watt. We know of no competitor who can claim that, and still deliver about 1000 inferences per second.

The new Ergo 2 delivers four-five times its predecessor’s performance for image classification at only 19 mW of power. Perceive

There are many companies readying or shipping chips for Edge AI, including SiMa.ai, Hailo Technologies, AlphaICs, Recogni, EdgeCortix, Flex Logix, Roviero, BrainChip, Syntiant, Untether AI, Expedera, Deep AI, Andes, Plumerai, in addition to Intel, AMD (Xilinx) and of course NVIDIA. Some, like NVIDIA and SiMa.ai are heading down the SoC route, where the chip offers a more complete solution including Arm or RISC-V CPU cores and I/O. 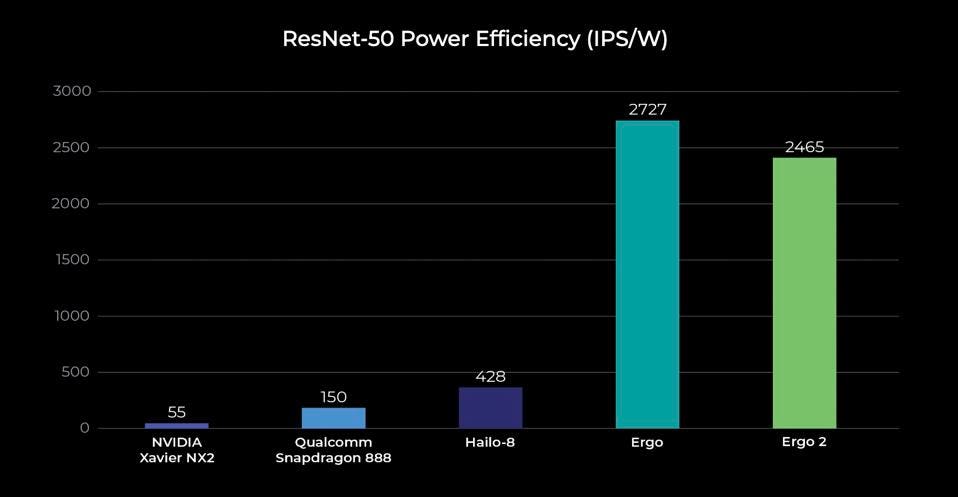 Both Perceive products demonstrate excellent power efficiency, however we note that its competitors have more features such as Arm CPU cores. Perceive

In contrast, Perceive (and others such as Hailo) has focussed on customers who are looking for an AI accelerator that attaches to an SoC for a specific application. Interestingly, the Ergo chip does not require external DRAM, although it supports connectivity to a NOR Flash to contain the weights for larger models. This can be a cost advantage for applications such as speech-to-text , audio applications, and video processing tasks like video super resolution and pose detection. Compared to existing products such as the Hailo-8 accelerator at 2-4 watts, the Ergo is targeting lower power (tens of milliwatts vs 2-4 watts for Hailo-8) albeit with lower performance.

Perceive is designed to be connected to a device application processor SoC. Perceive

As we’ve always said, the edge market is far easier to penetrate than training in the data center because different applications have dramatically different requirements. While an image processor for autonomous vehicles requires higher performance at higher power levels, a smart camera or an embedded speech to text processor demands a lower power envelope, and a lower cost. And many auto makers will prefer an SoC like NVIDIA Drive instead of designing their own SoC; Tesla is an exception to the rule.

Consequently, there is plenty of room for specific low-power processors such as Perceive, and the company is smart to quickly extend their first foray with a faster sub-watt processor. The software will be key to their success, enabling larger models to run efficiently on the new Ergo2.

We would note that there are many more competitors entering this market, so check back soon to stay up to date!