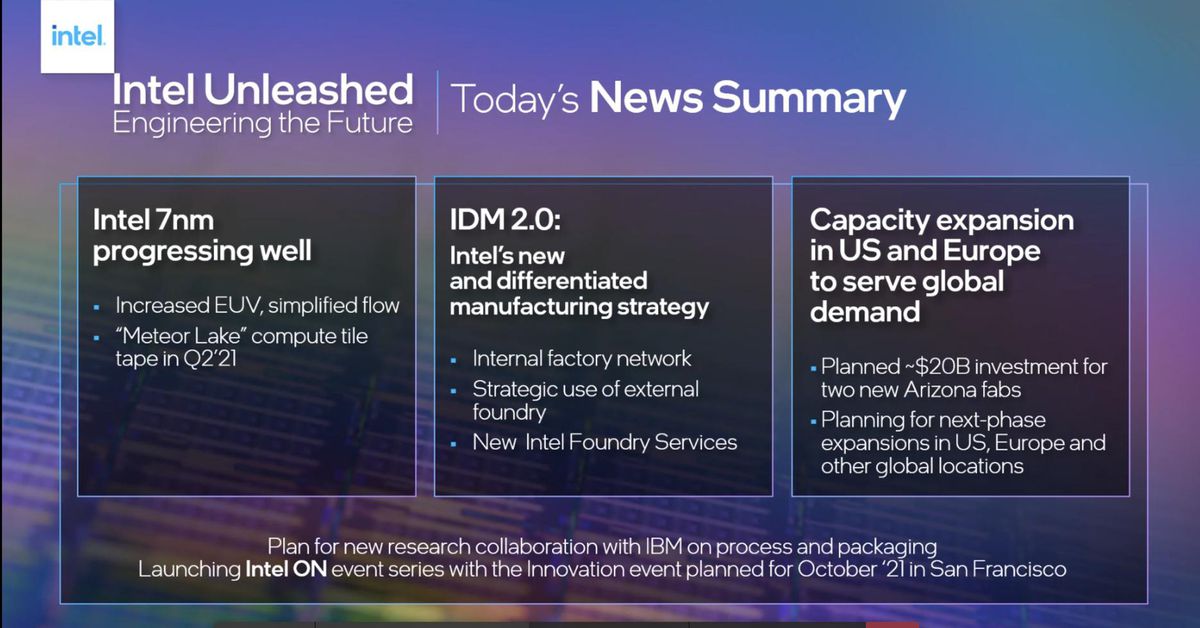 New Intel CEO pledges $20B in Fab investments. Is that enough? What’s next?

Newly installed Intel CEO Pat Gelsinger didn’t waste any time announcing that his top priority will be to “fix” the company’s manufacturing shortcomings which have delayed recent products by well over a year. I think he announced a good start, but frankly previous leaders have said they have a plan to fix this before. Let’s take a look at what might different this time around.

What Did Intel Announce?

First and foremost, Gelsinger made it clear that the company plans to maintain its role as an integrated device manufacturer (IDM), quashing any rumors that Intel might sell or spin out its massive fabrication facilities. Intel’s manufacturing prowess has provided a significant competitive advantage in the past, and Gelsinger believes it will again in the future. Shareholders and customers surely hope he is right, however he faces a monumental challenge: Intel’s first 7nm product, Meteor Lake, will not ship before 2023, at least three years later than key competitors including AMD and NVIDIA. Meanwhile Intel will increase the use of Taiwan Semiconductor Manufacturing Corporation (TSMC) for chips such as the upcoming Ponte Vecchio GPU and Habana Labs AI ASICs and others yet to be announced.

To demonstrate this commitment, Gelsinger promised Intel would invest some $20B in two new manufacturing facilities Arizona. In my mind, that sounds like business as usual. However, he also announced new Intel Foundry Services to enable outside use of x86 core technologies, including the latest CPU technologies, although timing of that move was left vague.

Gelsinger also announced that the venerated but discontinued Intel Developers Forum (IDF) will be rebooted later this year as “Intel ON”. This is a great move in my opinion, as the cost cutting elimination of IDF was universally panned as being short sighted and significantly reduced education and teamwork within the development ecosystem. Gelsinger led the original formation of IDF, so I’m sure it was on his list of low-hanging fruit.

Finally, and perhaps most intriguing, Intel announced that it will partner with IBM on research projects for semiconductor manufacturing and technologies. Intel and IBM represent a significant portion of the industry’s hardware research personnel and patents, so this could be a powerful alliance. Specifically, I hope this collaboration provides an avenue to productize some of the impressive IBM Research technologies in AI and memory I have covered previously on these pages.

While I am frankly a bit ambivalent about the decision to retain and double-down on the IDM strategy (new semi leaders such as AMD and NVIDIA have long abandoned this approach), I am happy to see that the last great USA semiconductor fabricator plans to remain standing. I suspect the US Biden administration feels relieved as well. The country’s global market competitive position cannot risk over dependence on foreign manufacturing of technology as critical as semiconductors.

So, what could make the outcome different this time around?

First, in a nod to AMD’s successful model, Intel has shifted its design strategy from building monolithic dies to a chiplet approach Intel calls “tiles”. For example, the upcoming Ponte Vecchio GPU consists of over 40 tiles in a package. At some point, I expect Intel to adopt thsi approach in desktop and server CPUs to be build in Intel Fabs, which will greatly reduce the pressure on the manufacturing process as well as engineering. Think of this as a System on a Package, a high-level version of a System on a Chip (SoC).

Second, the commitment to provide fab capacity and IP services to the industry should help the company finance additional investments, keeping the fabs humming along even as Intel outsources some of its designs to spread the risk. I think that without this move, the long-term viability of Intel fabs would have to be doubtful.

Third, never underestimate the power of a wise leader. Gelsinger certainly understands that competitive manufacturing capabilities may be necessary for Intel’s success, but will prove insufficient to ensure it. The company has design and product portfolio issues as well that must be resolved quickly, lest the firm put non-competitive products into the factory. Ponte Vecchio and Habana Gaudi hold tremendous potential, and now the company must execute. This is also where Gelsinger’s leadership will come into play.`

Gelsinger did what he had to do: communicate that he “gets it” and is making the investments to fix Intel’s foundation instead of abandoning it. Now he must tackle the rest of the story: his vast engineering teams must be coached to row together, in one direction. This is especially critical in the area of artificial intelligence, where the company has repeatedly misfired. The company now can not afford to miss the most important boat in the harbor: creating chips and software that can usher in Software 2.0.